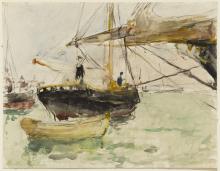 A small watercolor by Berthe Morisot was the most surprising thing I saw on our trip to New York.  At the Frick, on loan from the Clark, in that basement space they use for special exhibitions and works on paper, in an assortment of drawings by French Impressionists.  The watercolor is of a dark boat floating in green water among other crafts – masts, bow, lines for sail and anchor, a few indistinct figures moving about their work.  Colors wonderful – shadows of boats reflecting darker green below, sense of movement, mass, buoyancy.  Apparently she drew while herself on a neighboring boat and relished the difficulty of getting the lines while she herself went up and down.  A much better draughtsman than I had realized, learning from Turner’s watercolors in ways that I’ve not seen others do, allowing the colors to make a structure. Who is she?  Berthe Morisot.  The images I know are of her, especially Manet’s portraits, not by her.  At the Met later that day four or five really wonderful paintings by Morisot as part of their “Impressionism and Fashion” exhibition.  The women in these paintings – reclining or sitting, looking in mirrors or at us – emerge out of a shaded and subtly modulated atmosphere.  The air itself is thick with paint that condenses in the figure.  Clothes are beautiful.  A manifestation of what animates their wearers.  These women have not been dressed, they dress themselves.   I had little time, but tried to look carefully at just these paintings, promising myself that I would spend more time with them one by one in the museums where they reside.  In the gift shop, quickly scanning the one book on Morisot, I saw to my disappointment that nearly all her work is in private collections.