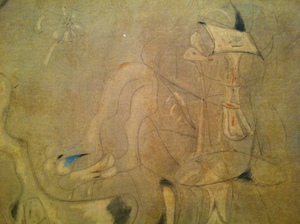 “There is my world.” – Arshile Gorky on Summation

What would it be to begin without a location in time?  A letter or an email always begins with a date, even the hour; when I begin these entries my first instinct is always to situate in time – last Wednesday, after studying Ernst’s collages.  But I think part of the strangeness of Arshile Gorky’s Summation is that it avoids a location in time.  The experience is of many, local, whirring events or personages.  Maybe as the mind feels on waking in the night, though with more tranquility than that, as, on a quiet day, taking a thankful walk.  The mind casts about, and, although it dreams and wonders about the unknown and recollects and watches the known, this is not really felt as looking forward and backward but as looking around. Why is it only now, many months after I saw and struggled with Summation, that this seems evidently its mode and quality?  I remember that when I went to see it I was in a hurry to get home to the baby and had been unable to find a taxi, and that there were only a few minutes before closing.  I remember that I hoped to find something to help me think about my father.  Perhaps, fixed on locating the sequence of events in the months before he died, turning from this to picture hurrying to the immediate needs of next days, I was too oriented toward calendar time to see the Gorky.  [Here it is, whole, though too small to feel at wall's expanse.] In my mind now it seems well-distributed, elegant and coherent. It would be very difficult to say where it starts, even where one’s eye lights first or in what order it observes.  A summation bears a different relationship to time, or happens in another realm of time – a repetitive, cyclical, associative time – not approachable in a sequence of minutes, but felt in the round of years.  Part of the fear of death must be that, as the minutes are torn from us one by one, we will not be able to hold, and hold to, the beautiful spaciousness of rounding in time. 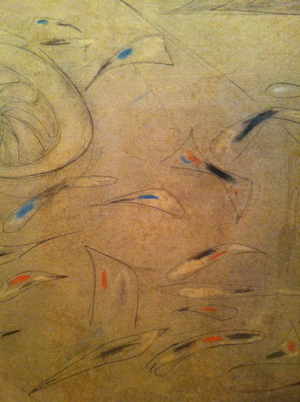 There are other feelings for form, of course, but that doesn’t mean the Surrealists didn’t have formal feelings.  Form is often described in spatial terms, as arrangements of objects, as landscapes with prominent and receding features.  Perhaps the Surrealist feeling for form could be evoked by inversion: one could speak of a disarray of objects, or of interior landscapes in which prominence is, like that in dreams, more a matter of excitation and disturbance.

This is not to say that when you look at, say, a Max Ernst collage, your eye is not still balancing the long pointed beak of the rooster against the long line of the legs of the naked woman he has turned over his knee, but that your awareness of the beak and the body, as a beak and a body, are affecting your seeing as loci of attention in a way that is not mostly about parallel lines but about balancing visceral experiences and grappling with perceived and imagined relations between them.

The thought I’ve been trying to get articulated for a few days, since seeing Arshile Gorky’s Summation, is that these turbid experiences of suggested meaning might still in some way be understood as formal. I rushed into the MoMA last Saturday at 5:00 (the museums closes at 5:30).  I didn’t plan to go, had been in New York for five days without setting foot in a museum, had given up on the possibility of going, all of us, the baby, too, were sick, we were leaving early the next morning.  After a meeting, I had been unable to get a cab for fifteen blocks and realized I was within blocks, decided to chance it…

I knew that if I had to check my backpack I would be left with ten minutes at most.  I discussed this with a sympathetic man at the information booth who, blessings on him, comped me; the much less sympathetic man at the entrance did make me go check the bag.  I couldn’t remember where things were; I’ve never spent time at the new MoMA the way I used to at the old MoMA; on the narrow escalators I was trapped behind someone who preferred to stand.

These are all aspects of seeing art in New York, but I’m not sure which should be brought out and which let drop.  I was hoping to hit Abstract Expressionism.  My father loved Rothko and I thought maybe if I got one of those I could use my ten minutes for missing him, but the one I saw through a doorway opening had a kind of bright lime green edge that I recoiled from and before I quite realized what was happening I saw a Gorky and thought I’ve been meaning to think about Gorky and stopped. In the wall text next to Summation, Gorky is quoted as saying, “There is my world.”  I could see from the dates that he had died the next year, and remembered dimly that there was something untimely and terrible about his death.  [I looked it up later.  He killed himself the following year, at the age of forty-four, after a gruesome two years, in which his studio burned down, a car accident left him with a broken neck and a temporarily paralyzed painting arm, and his wife left him, and took their two children.]  What had stayed in my mind was the sense that he had been an extremely important link from the Surrealists to the Abstract Expressionists – and that his loss had been bitterly mourned by both André Breton and Willem De Kooning.

The significance of Gorky’s influence was pointed out both in the Whitney drawing retrospective (winter 2003-2004), a show I thought was very profound, and in “Abstract Expressionist New York,” at the MoMA three years ago.  Although people do talk about it, I still think it is easy to overlook how totemic and dream-oriented the Abstract Expressionists were in their early days.  Frank O’Hara’s great essay on Jackson Pollock has a long useful section on Surrealism.

Another approach in the direction of my hoped-for thought might be: if one thinks of the forms discovered by the Surrealists as being in some way taken in and then diffused throughout the canvases of the Abstract Expressionists then one could in a way actually be a witness to this in looking at the works of Gorky. 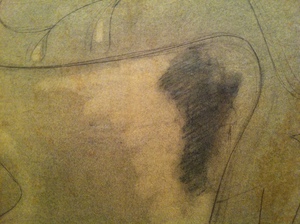 Wandering, I found in James Schuyler (Selected Art Writings, edited Simon Pettet, Black Sparrow Press: 1998) a short review of a retrospective of works by Arshile Gorky at the Janis Gallery in 1957, some ten years after Gorky's death.  The opening sentence gives practical details, the rest of the review is as follows:

"Included are the compelling Self Portrait and another (and, it appears, abandoned) version of the Artist and His Mother. These pictures give weight and pause to the transition from his long apprenticeship to the electric and inward freedom of his last and finest period.

Looking at a thick grey still-life, uncompromising and stolid, surely no one could have predicted the future Ingres of the unconscious, drawing out lines and washes to an incredible fineness and thinnness, creating new imbalances between linearly described shapes and freely placed color.  But his pictures would be almost unbearably intimate without the grounding in the discipline of his art.  Only assurance could allow him to give so freely without burdening; that and the incorruptible innocence plain to read in the downcast eyes of the child and the in-dwelling, straight-out looking eyes of the self-portrait."

I think this may help in ongoing efforts to understand Summation.  (First attempt under Gorky: Surrealism and Form)