Trying to be Taught 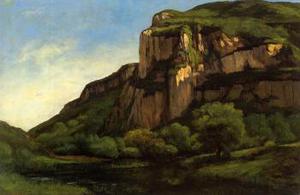 Reading about the early years in the lives of the Impressionists – the period in the late 1850s and early 1860s when they began to arrive and to meet one another in Paris – I have been thinking about the necessity and difficulty of finding teachers.  Unlike writing, the craft of painting has always been passed on in ateliers and schools.  Sometimes it seems like every painter in the mid-17th century in the Netherlands spent a productive period in Rembrandt’s studio.  Painting is an apprentice trade.  You watch the hand of a master and your hand becomes knowledgeable.  You practice under a master’s eye and the lines of your drawings lose their clumsiness.
The men and women who became known as the Impressionists were desperate for teachers.  As a young man in Le Havre, Monet was fortunate to stumble on Boudin and Jongkind.  In Aix, Cézanne, arguing with his banker father to be allowed to study art and confined to the study of “dusty plaster casts” and “black and white engravings after paintings,” was, John Rewald estimates, “in dire need of guidance.”[i]

But in Paris there was a surprising paucity of genuine help.  The Ecole des Beaux-Arts, controlled to calcification by the persnickety academicianism of the followers of Ingres, had made a decades-long practice of excluding Delacroix and the fiery energy he would have brought to students in search of more expressive means.  Delacroix himself, though his studio was open to any sincere seekers, was isolated and growing old. Teachers like Gérôme were fiercely critical of what seemed to them the ugly uncouthness that resulted when younger painters attempted to render realistically the world around them. At that time, Courbet was the enfant terrible of realism and the Paris art world was shot through with partisanship. At the end of 1861, some students even left the Ecole des Beaux-Arts in protest and petitioned Courbet to teach them.  He tried.  For a few crazy months he rented a large space and everyone went there with great enthusiasm and he had horses and bulls brought in to be painted ‘from life’ and cartoons of this ran in the papers.  But he was haranguing and repetitive, good at the manifesto of his own work but not at helping students discover their own and the experiment was given up in April of 1862, just at the time that Renoir enrolled in the Ecole des Beaux-Arts, and a few months before the arrivals of Sisley, Monet, and Bazille.

They met instead at the school run by affable, old-fashioned, unimpassioned Gleyre.  He looked at a study of a nude that Monet had done and he said, “not bad!... but it is too much in the character of the model – you have before you a short thickset man, you paint him short and thickset – he has enormous feet, you render them as they are.  All that is very ugly.”  The vigorous, impatient Monet remembered this vividly when he was interviewed about it some forty years later.  Gleyre had continued, “I want you to remember, young man, that when one draws a figure, one should always think of the antique.  Nature, my friend, is all right as an element of study, but it offers no interest.  Style, you see, is everything.”[ii]  After that, Monet came to the studio just enough to pacify his family, who were already quite uncertain about letting him pursue painting.

Gleyre’s interaction with Renoir is also illustrative.  Renoir remembered, again decades later, that Gleyre had said to him, “No doubt it’s to amuse yourself that you are dabbling in paint?”  And light-hearted Renoir replied, “of course… if it didn’t amuse me, I beg you to believe that I wouldn’t do it!”  Renoir thought Gleyre was “a second rate schoolmaster but a good man,”[iii] who at least “left them pretty much to their own devices.”[iv]  And Gleyre made a place where they could work.  Determined to learn, Renoir, Bazille, and Sisley went on diligently in that studio, meeting afterward to talk through all their own ideas.

When these just-emerging painters looked around them in 1862, the teacher who seemed just a few steps ahead of them on the path was Manet. In those first heady conversations as they walked out of Gleyre's, Bazille told Renoir "Manet is as important to us as Cimabue or Giotto were to the Italians of the Quattrocento; and as the Renaissance is beginning again, we must be part of it..."[v]

Part of the excitement of studying Impressionism is to watch how this quite large group of people was able to teach one another and themselves.  In the lives of writers, two, three, four friends may have a long effect on one another’s understanding, but in painting, large groups – in this case there are easily twenty figures of great significance, perhaps many more – may teach one another in a very substantial, personal way.

“Each of Renoir’s friend brought him a gift for which he was grateful,” the painter’s son judged later.  “Bibesco [a prince and patron] gave him his first opportunity to see the bare shoulders of women in their beautiful evening gowns; Cézanne revealed to him the precision of Mediterranean thought; Monet opened his eyes to the wild imagination of the people of the north European countries; and Pissarro formulated in theoretical terms his own and his friends’ researches… Sisley’s gift was gentleness.”[vi] Manet, Concert in the Tuileries Gardens, 1862 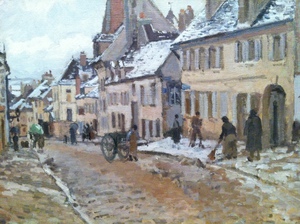 Camille Pissarro, theorist and mentor of the Impressionist movement, was known for giving sound advice.  Here are some of his thoughts as later recollected by the painter Louis Le Bail (in Rewald, The History of Impressionism).  They’re in the order that Le Bail wrote them down in, but I’ve broken them into territories, and set them to some iphone details I took of the last Pissarro I looked at, Pontoise, the Road to Gisors in Winter, 1873, at the Museum of Fine Arts in Boston:

Look for the kind of nature that suits your temperament.

The motif should be observed more for shape and color than for drawing.  There is no need to tighten the form which can be obtained without that.  Precise drawing is dry and hampers the impression of the whole, it destroys all sensations.  Do not define too closely the outlines of things; it is the brush stroke of the right value and color which should produce the drawing. In a mass, the greatest difficulty is not to give the contour in detail, but to paint what is within. Paint the essential character of things, try to convey it by any means whatsoever, without bothering about technique. When painting, make a choice of subject, see what is lying at the right and at the left, then work on everything simultaneously.  Don’t work bit by bit, but paint everything at once by placing tones everywhere, with brush strokes of the right color and value, while noticing what is alongside. Use small brush strokes and try to put down your perceptions immediately. The eye should not be fixed on one point, but should take in everything, while observing the reflections which the colors produce on their surroundings.  Work at the same time upon sky, water, branches, ground, keeping everything going on an equal basis and unceasingly rework until you have got it.  Cover the canvas at the first go, then work at it until you can see nothing more to add. Observe the aerial perspective well, from the foreground to the horizon, the reflections of sky, of foliage.

Don’t be afraid of putting on color, refine the work little by little.

Don’t proceed according to rules and principles, but paint what you observe and feel. Paint generously and unhesitatingly, for it is best not to lose the first impression.

Don’t be timid in front of nature: one must be bold, at the risk of being deceived and making mistakes.

One must have only one master – nature; she is the one always to be consulted.