Xu Longsen and the sense of touch 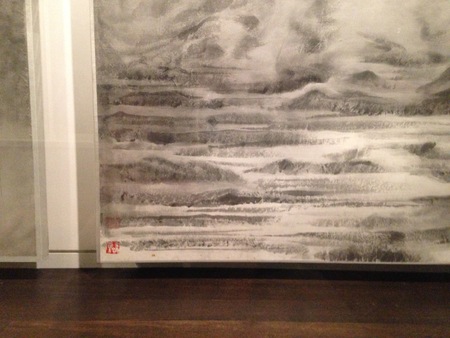 Over the weekend, I set out some pictures from Xu Longsen’s Light of Heaven exhibition at the Art Institute of Chicago in 2018. The exhibition was installed throughout the museum’s rooms devoted to art from China and was in complex relationships with the other works. Xu Longsen  works in series and groups, and from my photographs and the museum's documentation, I can’t tell which pieces had which names. All the works are from 2016-2017 and are in the collection of the artist, Beijing. When I stumbled into it the first time, I was impressed by these tall columns made out of felt and then saturated with washes of ink. The columns conjured up the vertical mountainous ink scroll paintings I love from different eras of Chinese painting. There was a row of these columns, and one much taller that reached up through the spiral staircase in that atrium space. On another visit, I found the room of these large wall-size paintings. The five in the next photo were at one end, I believe, and there were two sets on the side walls as well, and a row of columns down the center of the room. I went to the show several times, and made a lot of charcoal drawings from the room with the wall paintings in it. It was very satisfying to work in charcoal while looking at these. Here are some details from the large paintings in that very beautiful room. The texture is a very important part of the experience. In all the rooms with Xu Longsen's work there were many Do Not Touch signs everywhere, but I saw people touching the columns every time I visited. I think this is a part of understanding the significance of Xu Longsen’s work.

One day, in the room that usually has works from the permanent Japanese collection, and during the Light of Heaven also had one of the large Xu Longsen columns in it, I listened to a woman, probably seventy, a regular museumgoer, a lover of art, perhaps a bit self-important, telling a family who seemed to be from China about some things she noticed in the work. The family – a mother, a father, three children, two boys and a girl, and perhaps another man, a friend or an uncle – seemed very gracious. The woman and one of the sons explained to the museumgoer that the man in their family was the artist.

The museumgoer was surprised and pleased. She went on telling the family what she thought about art. After quite a long while, she let the artist and his family go back to the conversation they had been having about the installation.

The artist, Xu Longsen, was saying something to his family about the column in the center. I can’t remember now if he was just very near it, or if he actually reached up and brushed the surface of the column.

A guard said peremptorily, “don’t touch the art.” “He’s the artist,” his son said, as did a few others of us in the gallery who had overheard.

The guard said, levelly, “no one is allowed to touch the art.”