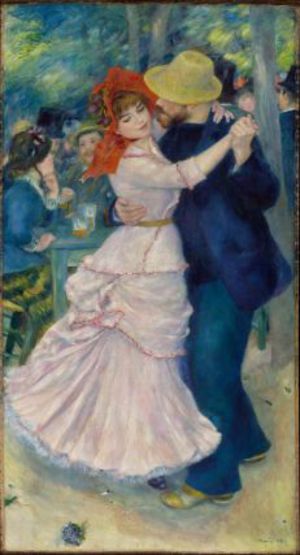 I went with the baby, perhaps two weeks ago now, to look at the Renoirs at the MFA.  In the great room of the Impressionists, she liked best the Degas ballerina, “girl! girl!” though she liked better still an actual girl in a polka dot skirt who sat on the bench.  In general, her preference was for statues, mirrors, the lime green chairs in the café, the beaded curtain hanging between two rooms of contemporary works, things with which she could have a spatial interaction.  It was hard to get her to stand still in front of the great Renoir, the full-length dancing couple.  (The people posing for this painting were the painter Suzanne Valadon and Renoir’s friend Paul Lhote.)  Woman in a red hat, cluster purple fruits part of bonnet, girlish delight; man’s face somewhat obscured; both bodies in happy motion.  I looked as well as I was able to and already had the impression of a more complex light, space, and atmosphere than I had before credited to Renoir.  We hurried out, both of us pushing the stroller, and some time passed – we accustomed ourselves to long strings of glittery beads, were hushed and still in the presence of a magnificent towering seated bodhisattva from the Eastern Wei dynasty, tried the new gelato at the café (excellent, though, as an administrator in the elevator pointed out to us over his delicately balanced cup, dangerously sticky) and purchased a children’s board book at the gift shop with pictures of Renoirs, “girl! girl!” said the baby.  I wanted, though, to see the Renoir again, and we made our way back to the room – again I saw mostly in glimpses, but how different the painting seemed – now it had those strange depths that open in paintings after longer consideration, now the space moved about the figures and the figures moved through the space.  The air was soft, but not cloying, pleasures of a summer breeze as summer turns toward autumn.  Probably, I thought, as we clambered into the sticky stroller and hastened down to stand in the fountain outside, this is a very great painting indeed.