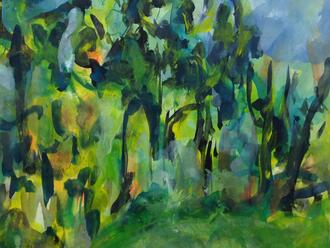 I just saw it for a minute. It was low down on the storage rack, and I had to crouch down to get to it. My one attempt to photograph the whole of it is clearly angled from above. Watercolor on paper. Even in this poor photograph, the sense of the colors is not far from the actual. 12 ½ inches high and 9 ½ inches wide. A little larger than an ordinary piece of paper.

The curator at the Knoxville Museum of Art, Stephen Wicks, tells me that it is similar in style and subject to a group of works belonging to the museum that were all done on Beauford Delaney’s last trip home, when he came back from Paris to Knoxville in December 1969 and January 1970. It had been sixteen years since he had been home.

The trees in Knoxville do have a particular look, there is a certain air. The city is in the Smoky Mountains, and the blues are special, and have certain relationships to the greens. Delaney had been working on the relationships of blue, green and yellow for his whole life as a painter, and, especially after he moved into completely abstract painting in Paris in the 1950s, he had done painting after painting of layered blues and greens that gave the impression of looking through a particular window of the rooms he lived in, in Clamart. To come from the Smoky Mountains, to spend sixteen years in Paris in other blues and greens, and then to return to the blues and greens of childhood. Many thousands were gone. Life had been a very great struggle. He was happy to be with his family. But he didn’t stay long; his life and his painting held together in Paris.

Just look at it. Just look at the blue filtering down. At the luminous combinations of yellow and green. At the calligraphic trees in their hushed arcade. A little before, in Paris, in 1965, Beauford Delaney had had a show at the Galerie Lambert. There was a catalogue. One of Delaney’s dearest friends – they had been friends for nearly twenty-five years at that point – was the writer James Baldwin. Baldwin wrote the catalogue essay. Here is his description of that window at Clamart:

There was a window in Beauford’s house in Clamart before which we often sat—late at night, early in the morning, at noon. This window looked out on a garden; or, rather, it would have looked out on a garden if it had not been for the leaves and branches of a large tree which pressed directly against the window. Everything one saw from this window, then, was filtered through these leaves. And this window was a kind of universe, moaning and wailing when it rained, light of the morning, and as blue as the blues when the last light of the sun departed.

Well, that life, that light, that miracle, are what I began to see in Beauford’s paintings, and this light began to stretch back for me over all the time we had known each other, and over much more time than that, and this light held the power to illuminate, even to redeem and reconcile and heal. For Beauford’s work leads the inner and the outer eye, directly and inexorably, to a new confrontation with reality.

The photographs I took in Knoxville are their own kind of storage, holding impressions of that watercolor that I didn’t know I was taking. I did not even have a first impression of Knoxville trees against the fluent sky until later that day, getting a ride to the airport, and I did not really guess at the emotional depths of the details until now, much later, looking at the expanded images here on my computer on March 16, 2020, on a day when the city of Chicago is almost silent, when we are all to keep far apart. It is snowing a little, and a small tree in a planter near my window, and the large trees, of our backyard and our neighbors’, press, draw flattened dark lines against a dull gray sky.