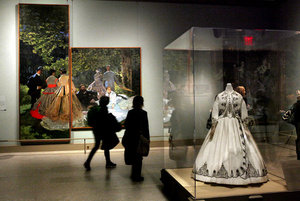 The Impressionists were my first painters, as I think they were many peoples'.  They required no explanation.  I liked them.  I came early to painting and at twelve was fervently memorizing schools, dates, palettes, styles, as other children at that age remember scores, teams, clothes, lyrics.  The works of each painter moved in my mind like small rushing galaxies; at museums, I knew a Degas or a Monet across a room.

As one grows older one comes to like bitter tastes.  The first sweet passions of youth, even if still felt now and again in private, seem soft, insufficient, a little embarrassing.  Coffee, Beckmann – one turns to darker matters.  The Impressionists don’t seem troubled enough; theirs are styles without irony.

One of the difficulties of seeing the Impressionists again is to learn to see the difficulties.  The paintings – reproduced in cheap metal frames in every dorm room and dentist's office – can seem as if they're not really paintings, not really individual canvases labored over by individual artists, at all.  Even the story of them, the way the artists were shunned by the Academy and were hungry and obscure and worked in a manner at the time genuinely radical and offensive, all seems shaded over with a sort of happy satisfaction.  When I try to say what this happy satisfaction is, the one that these paintings can seem to exude, I find myself thinking that it is vaguely akin to the feeling of shopping.

Shopping – in the sense of ordinary middle class people wandering about in a maze of acquirable but not strictly necessary commodities – came to have certain peculiar characteristics in the 19th century in Paris as the Impressionists were growing up and beginning to paint.

Here is a description of the flâneur and the shopfronts taken from Pierre Larousse’s Grand Dictionnaire universel (Paris 1872) that Walter Benjamin included in his Arcades Project, his vast fragmentary meditation on 19th century shopping arcades.  “First of all, there are the flâneurs of the boulevard, whose entire existence unfolds between the Church of the Madeleine and the Théâtre du Gymnase.  Each day sees them returning to this narrow space, which they never pass beyond, examining the displays of goods, surveying the shoppers seated before the doors of cafés…. They would be able to tell you if Goupil or Deforge have put out a new print or a new painting, and if Barbedienne has repositioned a vase or an arrangement; they know all the photographers’ studios by heart and could recite the sequence of signs without omitting a single one.”  [Arcades Project, p451, translated Eiland, McLaughlin, fragment M18a,3]

Goupil, of whom it is immediately noticed if he has put out a new painting, opened the first retail house for the sale of paintings in 1829.  The Impressionists were among the first French children to see paintings in shops.  A fragment of an Etruscan fresco displayed in a Paris art shop window looks very different than a painting painted after the 1830s does in the same window, and part of the reason for this is deep in the consciousness of the painter, who knows his work is going to be seen this way, and who, as a result, gets unavoidably entangled in questions of style.

Here is what Larousse’s image of the scrutinizing flâneurs suggests to me about an emerging idea of style. Examination, at a distance, of wares behind glass, of the style of shops, and the examination, at a distance, of bodies enveloped in clothes, of the wares walking about, recognizable by their style, a style that is an intricate combination of the style of the designer / manufacturer and the style of the wearer.  Little thin layers of the exterior and the interior, wares of shops to be displayed inside homes and outside bodies; the painter of costumed bodies in decorated interiors reproducing these wares as further wares.

It was a troubling feature of the Metropolitan Museum's recent "Impressionism, Fashion, and Modernity," exhibition that it was harder than usual to tell the difference between the exhibition itself and the gift shop set up at the end.  In the exhibition halls, mannequins in glass cases modeling clothes similar to those in the paintings had the effect of making the paintings seem like fashion plates for a magazine.  Although this was possibly a productive confusion, it made me unhappy.

I came away with an incipient thought that the Impressionists' use of paint texture becomes a means of distinguishing the paintings at a great distance.  A painting, like a dress along a boulevard, now had to be recognizable from afar – commerce adjudicated in the space of the 19th century city with its fashionable women and magazines of fashion.

In a way this might be considered a further step related to that of the late medieval Italian painters who began to paint on portable canvases and to sign their pictures.  The authenticity and saleability of the object, both at once, are established by the signature and, in the later case, by the signature style.

Part of what now makes us, or me anyway, suspicious of the Impressionists is how saleable they are.  The ever higher prices the original works command seems but the top of a pyramid of sales: you can buy reproductions of Monets in good oil paint for many hundreds of dollars, in museum gift shops you can buy silk scarves made in Italy with patterns of Monet’s water lilies on them, online you can order for your baby a onesie made of camouflage fabric printed with a Monet.

All this apparel, for the exterior of the body and the interior of the home seems to make the Impressionists blameworthy.  As if their facility with style and shopping diminishes their work.  But perhaps this is a way of deflecting my own attention from the much more disturbing problem that museums have to a great degree set themselves up as large department stores, in which one acquires “looks” and purchases suitable accoutrements and mementos at the end of the visit.  A Beckmann seems to scorn my commercial desire, have I been mistaken in worrying that the Impressionists comply with it?