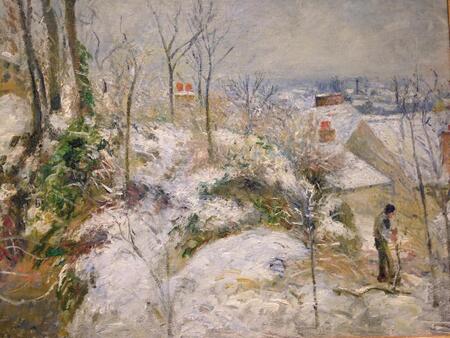 This painting – Rabbit Warren at Pontoise, Snow by Camille Pissarro, 1879 – is a regular point of reference for me, one I visit fairly often at the Art Institute. I had thought that writing of it would wait until next year. (Will we be inside again? There are questions and predictions about future waves of the disease. Hard to grasp what the year will be.) 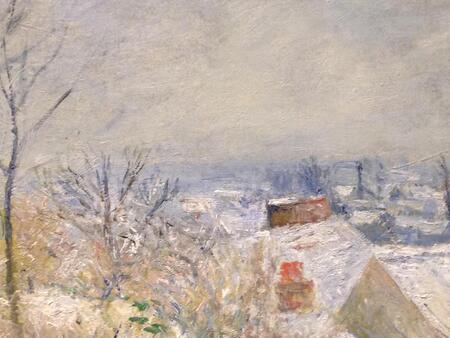 Most winters I write a little about snow and painting because snow is painting in nature. 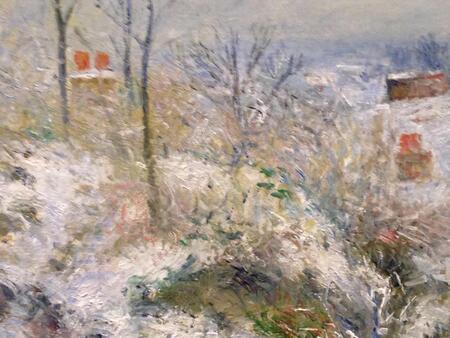 Pissarro was a great snow painter. He painted nearly a hundred paintings in which snow was a central theme. This winter, of 1879, was an especially severe one in France, and there are many great snow paintings from that year.

The snow over the rabbit warrens gives this a hummocky shape. 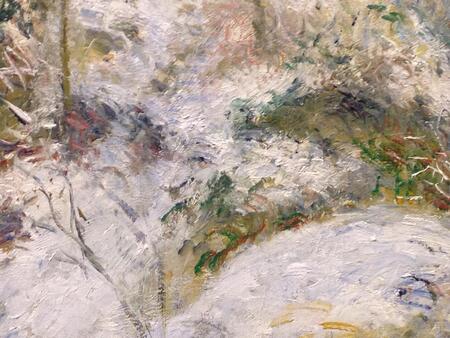 One of the difficulties with painting layered white is that you get too much opacity and a painting loses its depth. Besides the quality of actual snow is not of airlessness. There have to be other colors layered in to get the feeling of the snow. 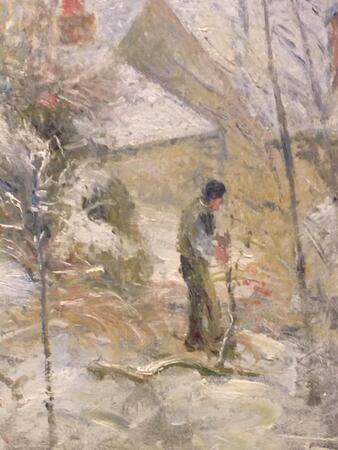 I remembered – walking out this morning to fill the bird feeder, to see how the daffodils were managing bent under their burdens – that to enter a landscape of snow seems almost like entering paint. 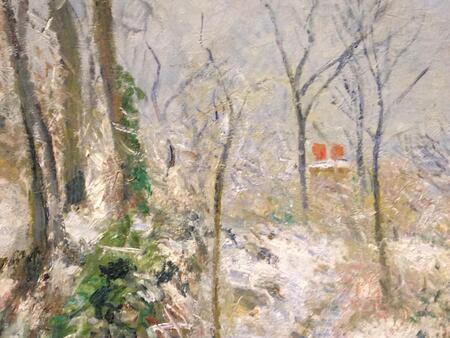 Some paintings are seasonal. To feel the air in them out of season is like trying to pack for a trip to a different climate, you can’t really guess with your body how it would feel. 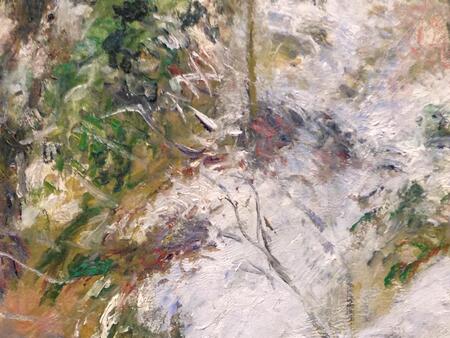 The snow is already melting here as I write this. And I notice this odd bright green that Pissarro used. Perhaps the painting too is of snow early or late, stretched beyond its season. 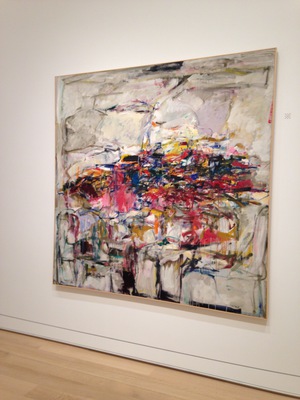 Two weeks ago, I went to the Art Institute to spend some time in the new modern wing and my attention was caught by a Joan Mitchell from 1955 called City Landscape. Since the election I have been thinking about cities, and living in them, the ways that a city’s life may be dealt a blow. It is December in Chicago, and cold, and I saw the heart of the city, what the wall text calls “nerves and arteries” in the colors, so many, too many to look at all at once, that drip together into brown, that, at least in my pictures, resembles the collecting trunk and lower limbs of trees, and I saw the grays and whites above and below as the bleak surrounding sky. Cities, one of the largest things people make together that are still, more or less, on a human scale, can be walked across in a day, can be, with effort and diligence, comprehended by a studying person. A moment later, I came to one of the museum’s edges, where it looks out over Millennium Park. Everything was gray, but clustered at the center was the vitality of roads, traffic, the living though not visibly inhabited city, and above there were the rectilinear outlines, the gray buildings fogged at the gray sky. In this room, there are Giacomettis, studying and participating in the city. The gray around, the extreme density of the interior. In the new year, we will learn more. 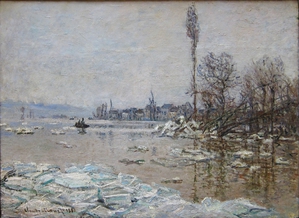 débâcle: the violent flood that follows when the river ice melts in spring

In the winter of 1879-1880 the weather was unusually stormy and cold.  All along the Seine there were record quantities of snow and ice.  That winter, Claude Monet was at Vétheuil, a village near Argenteuil and to the northwest of Paris.  Monet was living in straitened circumstances with his children; his beloved wife Camille had died earlier that year, in September.  The remaining Monets were sharing a household with Alice Hoschedé and her children.  The winter was so fierce that even at Christmas it was impossible for them to be joined by Alice Hoschedé’s husband, Ernest, who had been one of Monet’s important supporters and collectors.  Ernest Hoschedé was suffering through his own difficult period; he had gone bankrupt two years before, and his entire Impressionist collection had been sold at disastrously low prices.  It is not entirely clear how the merging and transformation of the Hoschedé and Monet households took place, but this grim winter was to prove a turning point both in Monet’s life and in his work as a painter.

I have been reading about that winter, and the paintings Monet made then, for nearly a year.  Reading very slowly, chiefly in one catalogue called Monet at Vétheuil: The Turning Point.  The catalogue caught my attention in a used bookstore here in Cambridge, in part because the show that occasioned it was held at the University of Michigan Art Museum in Ann Arbor, where I am from, and in part because the subject of the paintings is winter.  My father died in Ann Arbor in early February of 2013, during a bitterly snowy fortnight.  This February, two years later, I am again confronted by mourning and by snow. Although I have been thinking about these confluences for many months, I am not making any progress on drawing them together as an essay. So I have decided to try writing a series of broken pieces instead.

During the winter of 1879-1880, Monet painted a series of canvases of the snowbound river and of the eventual catastrophic breakup of the ice.  The series of paintings, called Les Débâcles, take their name from the river floods that followed the thaw in early January of that year.  Until this point, much of Monet’s work had been of urban landscapes. There had also been portraits and still lifes; the work depicted or implied the presence of people.  But this winter, he painted landscape alone, deliberately removing the boats and industry which photographs from the time show to have been part of the landscape at Vétheuil.  Instead, the viewer of the painting is alone in nature; the subject of the pictures is the terrible majesty of winter and its devastations.