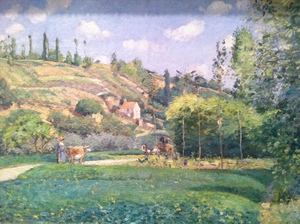 [This is the second installment of visual notes on this Pissarro, documented by iphone.]

Stretch of cultivated field down to earth: Shape of path as it curves back: Step back to look at whole again: Once having looked at these two dark areas, upper tree, lower hole, the whole right side of the picture has beautiful depth: What would Pissarro have made of this fragmentary way of writing down the seeing of his picture?  Would he know right away that, as happened in his own time, our new tools have changed the experience of sight?  He was the great theoretician among the Impressionists, the one who articulated what they were after.  But in all the letters to his son Lucien that are such a full statement of his thought I cannot find a single mention of photography.

He does, though, indicate how important the idea of the series was to his way of thinking.  In a letter from the summer of 1895, he writes that he is sorry that Lucien has been delayed in getting to Paris for now he will miss seeing "the Monets.  This is a great pity, for the Cathedrals are being much talked of, and highly praised, too, by Degas, Renoir, myself and others.  I would have so liked you to see the whole series in a group, for I find in it the superb unity which I have been seeking for a long time."   [June 1, 1895]