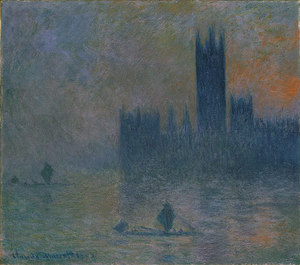 I hadn’t appreciated what it meant to Monet to work in a series.  I knew the haystacks and the cathedrals and the water lilies showed different times of day – that you could see the morning in the yellow light along one edge of a bridge or doorframe and the evening in the lavender along the other – but I hadn’t really thought through how Monet would then actually have to work on them. I assumed, I think, that he began, say on a morning painting of haystacks, finished that one and then moved on to one of the afternoon. But he was painting actual haystacks and of course the effects he was interested in were only visible for perhaps an hour, or much less on any given day. He had to work on the whole series at once, and he switched from canvas to canvas as the light changed.

This is an extraordinary feat of concentration, like playing simultaneous chess games.  Although the paintings in a series all had cathedrals in them each one was different in cast, in the range of color and emotion. Imagine working simultaneously on ten essays and switching every hour. Watching Monet, surrounded by his canvases, made a vivid impression, and he and his friends left wonderful glimpses of what he was like at work.

Monet apparently began working in series as early as 1885, when he went back to locations where he had painted with Boudin, Jongkind and Courbet.  Guy de Maupassant, who had that year published his second novel, Bel Ami, remembered watching Monet at work at Entretat:

I often followed Claude Monet in search of impressions.  He was no longer a painter, in truth, but a hunter.  He proceeded, followed by children [possibly his own and Mme Hoschedé’s] who carried his canvases, five or six canvases representing the same subject at different times of day and with different effects.  He took them up and put them aside in turn, according to the changes in the sky.  Before his subject, the painter lay in wait for the sun and shadows, capturing in a few brush strokes the ray that fell or the cloud that passed….I have seen him thus seize a glittering shower of light on the white cliff and fix it in a flood of yellow tones which, strangely, rendered the surprising and fugitive effect of that unseizable and dazzling brilliance.  On another occasion he took a downpour beating on the sea in his hands and dashed it on the canvas – and indeed it was the rain that he had thus painted…. (1)

There were some further ways in which Monet conceived of ‘working in a series.’  Although he was wary of talking about studio work, far from the plein air that was the Impressionists’ rallying cry, still the series were finished in the studio. To feel balanced and deep, a picture needed the period of further consideration possible in the studio. There, too, he worked on what might be called their “seriesness,” laboring to distinguish each from the others and to assemble a set of impressions and effects of light that made sense as a group. This meant that none of them were finished until all of them were finished.

The group often referred to as the fundamental series is those of the haystacks, perhaps because the method was there worked out completely, or because Monet intended to show them as a group, and did, with Durand-Ruel, in 1891. He had apparently thought he would have just two canvases – one was to show sunlight and the other gray weather. But, as he worked, the effects he wanted to catch, those that demonstrated what he called “instantaneity,” multiplied, and in the end he showed fifteen pictures. These were a financial success, the dealer was able to sell them for between 3,000 and 4,000 francs.

Monet was then fifty-one; Impressionism had won its initial battles, but it was still not easy to make a living.  The idea to work in series emerged as Monet was beginning to be a successful artist, and the success of the series themselves helped him to continue working in this unusual way. It required a substantial outlay for him to get the canvas and materials to begin so many pictures at once, and then he continued working on them for years before the group could be ready for sale.  As he wrote to his wife Alice Monet from London, “I have something like sixty-five canvases covered with colors…What a bill I’m going to have at Lechertier!” (2)

The London series (those of Charing Cross Bridge, Waterloo Bridge, and the Houses of Parliament, done between 1899 and 1904) are the culmination of the method. As he matured, Monet chased increasingly fugitive effects. “I adore London,” he told the dealer René Gimpel, “it’s a mass, an ensemble, and it’s so simple. Then in London, above all what I love is the fog.” On another occasion he said, “without the fog London wouldn’t be a beautiful city. It’s the fog that gives it is magnificent breadth.  Those massive, regular blocks become grandiose within that mysterious cloak.” In 1901, he wrote to Alice, “I can’t tell you about this fantastic day.  What marvelous things, but only lasting five minutes, it’s enough to drive you crazy.  No, there’s no land more extraordinary for a painter.” (3)

A lovely exhibition catalog for the show Monet in London with text by Grace Seiberling points out that this adored fog was the result of heavy pollution. Monet sometimes let the industrial browns and greens go, but he saw it all, as he explained to an interviewer, also in 1901:

The fog in London assumes all sorts of colors; there are black, brown, yellow, green, purple fogs, and the interest in painting is to get the objects as seen through all these fogs…. Objects change in appearance in a London fog quicker than in any other atmosphere, and the difficulty is to get every change down on canvas. (4)

He was beset by difficulties.  His friend Sargent would come to visit him at the Savoy Hotel, where Monet stayed in part because of the balconies directly over the Thames.  There, Sargent said he “found him surrounded by some ninety canvases – each one the record of a momentary effect of light over the Thames.  When the effect was repeated and an opportunity occurred for finishing the picture, the effect had generally passed away before the particular canvas could be found.” The situation was almost ridiculous.  He would sit among his hundred canvases, an elusive effect would appear there before him over the river and he would search, he told the Duc de Trevise, “feverishly,” among the leaning paintings for one that matched the effect.  In the end, he would “choose one of them that didn’t differ too much from what I saw,” and then, “despite everything, I altered it completely.  When my work was finished, I would notice, in moving among my canvases that I had overlooked precisely the one that would have suited me best and which I had at hand.  How stupid!” (5)

His friends and his wife became familiar with the anxious state of waiting for a longed-for effect to return.  And then, these effects, even the sun itself, moved with time, and might well appear in a different part of the sky.  “Around 4 o’clock,” he wrote in a letter, “the sun finally showed itself from time to time and I was thrilled for the motifs at the hospital, but there I was completely disappointed; a few days without seeing it, the sun, and it appears a kilometer from my motif; there is no longer any hope on that front, and I’m really distressed about it!  It would have been so beautiful to do!” (6)

He hurled himself into work, faulting himself for only having the energy to work eleven hours at a stretch.  He took his canvases home to the Savoy and studied them until he went to sleep.  One couldn’t be an artist, he told an interviewer later, “if one doesn’t have his painting in his head before executing.” (7)

This interview was quoted by Gustave Geffroy in his book about Monet and his work, published in 1922.  Geffroy had himself been to see Monet working in London in February of 1900; he had arrived with Monet’s old friend Georges Clemenceau; they found Monet at work on the balcony:

From time to time, he stopped.  “The sun isn’t there any longer,” he would say….All of a sudden Claude Monet would seize his palette and brushes.  “The sun has come back,” he said.  He was at that moment the only one to know it.

The others on the balcony looked intently for the change Monet had seen, but could not find it.

We still only saw an expanse of woolly gray, some confused forms, the bridges as if suspended in the void, smoke that quickly disappeared, and some swelling waves of the Thames, visible close to the bank. We applied ourselves to see better, to penetrate this mystery, and, indeed, we ended up by distinguishing we didn’t know what mysterious and distant gleam, which seemed to be trying to penetrate this immobile world.  Little by little, things were illuminated with a gleam, and it was delicious to see, feebly illuminated by an invisible sun, like an ancient star, this grandiose landscape that then delivered its secrets.  (8) (2) Monet’s letters are designated by the numbers given them in Daniel Wildenstein’s catalog raisonné, this one is w.1532]