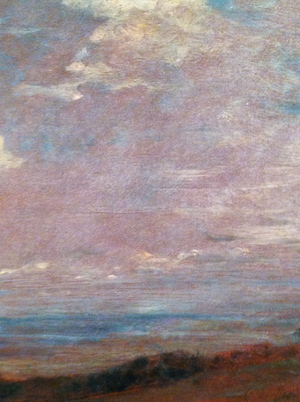 In New York in the fall, making my way through the reorganized back rooms of 19th century European art at the Metropolitan Museum, I was pleased by two landscape recoveries.  Wonderful oil sketches by Constable that used to hang scattered in obscurity, somewhere past the Corots, have been hung together, with prominence.  And three Daubignys, for many years unviewable, now hang in a row, constituting a quiet assertion, long missing at the museum, that this is a painter worth contemplating.
Constable and Daubigny are tied together in various ways.  An important exhibition of Constable’s oil paintings at the Salon de Paris in 1824 had an impact on the French landscape painters who were to become the Barbizon School, of which Daubigny was a part. Daubigny himself would have been seven years old at the time of this exhibition, but other contact with the work of the great British landscape painters was of significance for him at several key moments in his development.

Intersections are not only biographical.  A nice passage comparing the two painters turns up in a 1903 monograph on Constable by Robert George Windsor-Clive, earl of Plymouth.  Daubigny, writes Windsor-Clive, loved “the quiet tones of early morning and evening effects on the French rivers from a barge on the Oise or the Seine; translucent skies and clear reflections.  He seemed generally to prefer the bright though tender colours of spring and early summer, to the heavier and more sombre tones of August.”  Not so Constable, who chose “the sharper contrasts of midday light, the angry storm-clouds broken by bright flashes of sunlight, and the heavy greens of midsummer.” Nevertheless, the two had something significant in common: “both artists approach Nature with the same honest intention of painting her, so far as they are able, as they see her.” [itals mine]  This was to be accomplished “not with the warm brown foundation and limited colour-scheme of the old school, but with the full perception and enjoyment of local colour both in shadow and in sunlight.”
The phrase “as they see her,” could be put into the present continuous to bring out something of the painters’ particular quality – as they are in the act of seeing her.  These two, I think, have an unusual genius for making the viewer feel the air. Two of the works I studied at the Met may help me to try to say what I mean.

John Constable’s oil sketch “Hampstead Heath with Bathers,” was one of about a hundred such sketches that he made in that rural location in 1821 and 1822. The project was to suggest particular effects of atmosphere.  The text at the Met notes a beautiful fact, that Constable “called this practice ‘skying.’” The museum text also points out that Constable “often included a strip of land to contribute a sense of scale and depth.”  This sounds technical, even mechanical, as if it describes a scientific manual that overlays diagrams with little black stripes of measurement. But here, actually, is no mere strip of land, but a protected cove for bathers who are to be seen standing waist-deep in the water. The feeling of the sketch (it is a small one, slightly less than ten inches by a little more than fifteen) is that one is oneself wading in the water while the vast sky rushes overhead. The sensation comes partly from the white brushstrokes over the blue of the sky, partly from the way the water gathers and reflects the other colors of the scene, partly from some elusive but definite feeling that the painter molded the paint to reflect the day he was in. The wind was in his eyes.  He wrote on the back of the picture, “July—noon—Hampstead Heath—looking north—wind south east.”

The Daubigny, as the Earl of Plymouth might say, eschews these sharp contrasts of noon and midsummer.  Here is a first sighting.  Distracted by the frame, the shadow cast by the museum’s overhead lights, the photo has the not-knowing-where-to-look quality of the first encounter: [Although my iphone pictures have their awkwardnesses, I still prefer them to the Met's online reproductions of these two works, which are curiously bleached of color.  The Constable is lacking the reds and purples that give the heat and excitement of the day, while the Daubigny is missing the cool, dark greens that settle the eyes for darkness.]

In the Daubigny, as in the Constable, figures come to water.  But in the Daubigny our imagination makes us not bathers, but someone who watches the cows returning to the village in the evening. The water feels entirely different in the two pictures – one all salt and wind, the other mild and still, for slaking thirst and for repose.  Nevertheless, the presence of water is of great help to both these painters, wishing, as they do, to paint the sky and its movements.  Reflections give a second view, and the looker-on, measuring the sky and its image together, may find it easier to guess and enter the feeling of the day.  One of the great beauties of the Daubigny painting is the way all its gentle forces meet and are reflected back to one another in this central convergence: The light has a luminous yellow arriving from the sky.  Effects of light are entirely different depending on where you look in the picture. A lovely passage of sunset is here: I think it is this variety of atmospheric effects within the work that eventually gave me an experience I associate with Daubigny. After looking slowly and with consideration, the painting seemed to show a later time, and to have become more tranquil.  As I became accustomed to it, it had the very effect on me that one sometimes observes in oneself in the evening.  Standing still, looking at the sky, or, especially, the sky and the water together, one feels that the world has, before one’s eyes, grown a shade darker, and that one is oneself aware of the world and a small part of it.  When I photographed what felt like my last understanding of the painting, it came to this: