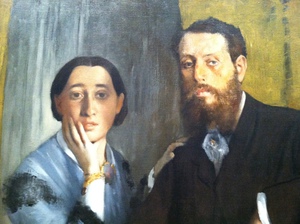 The trio of Degas portraits currently at the MFA (written about here two weeks ago) has drawn my attention back to Degas.  In half an hour with the Degas at the Metropolitan Museum, and on a quick return visit to those at the MFA, I found myself concentrating on the negative spaces, what happens beyond the edges of the figures, and on the things between things. I looked closely at Edmondo and Therese Mobilli, the portrait Degas made of his sister and her husband about 1865, and at Duchessa di Montejasi, with her daughters Elena and Camilla, from about 1876.

And then at home, I went back to some passages of Degas’ notebooks, and was struck by one I had marked before:

"Draw a lot.  Oh, beautiful drawing! – Ornament is the intelligence connecting one thing and another or [one] overcomes this gap by a connection between the two things and
that’s the source of ornament…." {from Sources & Documents: Impression and Post-Impression, 1874-1904, compiled Linda Nochlin, notebook of 1869, quoted on p62.}

It’s this sentence: “Ornament is the intelligence connecting one thing and another,” or the effort of overcoming the gap between two things is the “source of ornament.”  Here is an evidently ornamented passage in the portrait Degas made of his sister and her husband: The idea of connectivity seems naturally connected to hands – with what else do we stretch across to “another thing.” A further sense of how these connections might be discovered to the viewer comes from a later notebook passage with more instructions the painter made to himself:

"Do every kind of worn object placed, accompanied in such a way that they have the life of the man or the woman; corsets which have just been taken off, for example – and which keep the form of the body, etc. etc."   {see source above, p63.}


Of course one thinks immediately of Degas’ bathers, his dancers.  But even when his people are still wearing their clothes, the clothes follow their forms in such a way that one can almost see a kind of trailing off of the form as one comes to the spaces between the figures. I think part of the beauty of this so-beautiful space between the Duchessa and her daughter is that it still somehow has the residue of their two forms.  The painter has found a way to overcome an obviously formidable distance between them.