A First Glimpse of Sargent and Monet 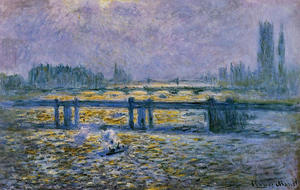 In a book on Monet’s series paintings of London (between 1900 and 1904 he made almost a hundred paintings of three subjects: the Waterloo Bridge, the Charing Cross Bridge, the Houses of Parliament) I read this cursory paragraph:

The successful portrait painter Sargent, who urged Monet to show in London in the early 1890s, may have encouraged the artist’s professional interest in London.  He was very much in evidence when Monet was in London and assisted him in making arrangements, dined with him, and provided social contacts – some of whom may have been intended as potential patrons. [1]

They had known each other some time, apparently, and Sargent was good at, and generous about, practical arrangements.

In a letter from Pissarro to his son Lucien written in 1891, “What you say about Sargent doesn’t surprise me; Monet had told me that he is very kind.”  Monet, though, seems to have had more feeling for Sargent as a compatriot painter than Pissarro did.  In the letter, Pissarro continued, “As for his painting, that, of course, we can’t approve of; he is not an enthusiast, but rather an adroit performer, and it was not for his painting that Mirbeau [the novelist and critic] wanted you to meet him. He is a man who can be very useful…” [2]

There he is -- Sargent -- darting about in the background of Monet's life.  Encouraging, facilitating.  Both men were extremely rigorous, both worked incessantly, both were fastidious in their artistic ideas and tastes.  What did they mean to each other?