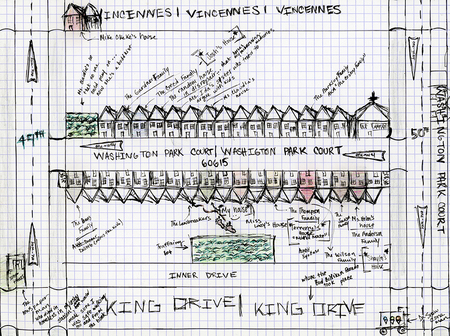 I am honored to have the work of Jazmine Harris, and her collaboration with Terrence Thompson, in this entry of the Frederick Project. I've admired Harris's work since I first encountered it two years ago, at the University of Chicago, where she did her MFA at the Department of Visual Arts. Harris's work continues to inform my thinking about the different relationships that art and writing can have, and has been in my mind as I have been making entries at the Frederick Project about ways of seeing in our shared neighborhood. I asked Jazmine Harris if I could feature some of her work here. She has written a short introduction to her larger project, and included a drawing, a lineated interview, and a photographic diptych. -- Rachel Cohen

In 2017, what started as an open exploration of my past for a theatre project slowly began to morph into something larger yet unbeknownst at the time. Inspired by a series of poems from A Street in Bronzeville, Gwendolyn Brooks's first published book, I initially set off to create a one-woman show that employed performance techniques borrowed from Anna Deavere Smith and the documentary theatre community. Through the performance of others and their lived experiences, primarily former neighbors on Washington Park Court, a block situated in the heart of Bronzeville, I began to unpack our collective memory regarding our shared space. Fusing several in-person interviews and their respective verbatim transcriptions, I drafted monologues and then selected three to be performed on "the stoop"; a sculpture that I built to symbolize both community and the third space. Since my original performance, I've worked over the years to expand upon older interviews. By sitting with, studying, and meticulously transcribing each intimate conversation, I continue to get as close as I can to the sound of each voice. This process never ceases to be any less intimidating each time. Still, I'm proud to have given form to a deeply personal and diasporic work, which weaves in and out of memory, portraiture, and performance ethnography connecting and simultaneously avoiding each of their limitations. My goal has always been to give voice to the lived experiences of everyday black folks, and in the excerpt, which follows, I revisit my dear friend Terrence's, aka my "childhood mind mate," monologue. -- Jazmine Harris 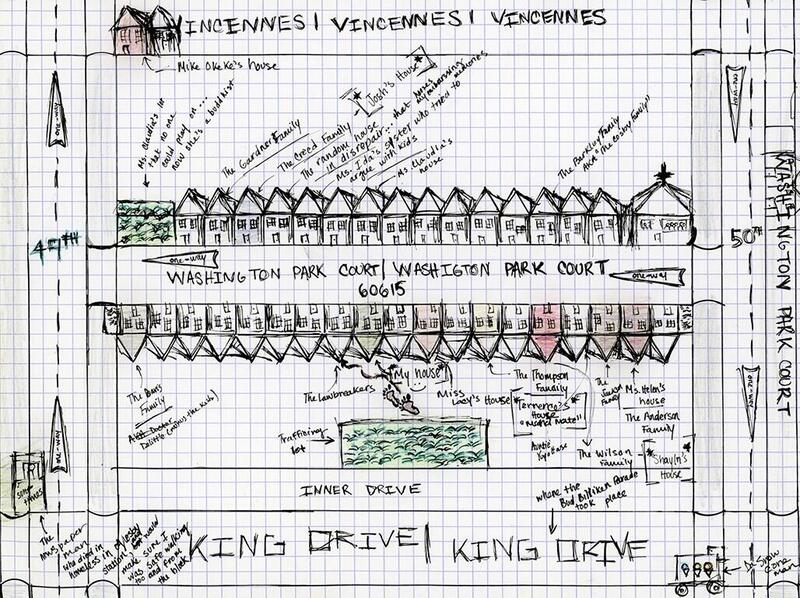 Coming on to the block and being the new kid was a lot of pressure.

Cause my block on 85th and Western,

You had to walk four or five blocks down to see a change.

But on Washington Park Court it was like, I could walk a block away and see the change

So I was a little scared.

you know am I in the hood now?

Now, the block to me is like so beautiful.

At the night at the daytime, it doesn't matter like,

this symmetry, this balance.

I just love the way the block looks like,

I love the block and its whole aesthetic but at the time like,

I didn’t see that.

Yah know I thought it was cool, you know,

I didn't think it was ugly or that it looked bad,

but like idontknow I was still suspicious of it

Living on the South Side, being middle class didn’t really guarantee you much if you're black.

and yadadadada, and y'all go on vacation, and like yah know shiiid y'all rich.

I'm not comparing it to like growing up yah know dirt poor, in any way like that's way worse yah know,

but my experience was kinda like, always just kind of being confused as to where we stood economically.

I remember we watched the Cosby show together as a family and like,

at an early age, I remember we as children comparing ourselves to the Cosbys,

and my parents are like, We ain't got Cosby money!

So we’re like but we have a nice house,

But we go on vacation?

That don't mean nothin’ either…

They made it very clear to us, like anytime