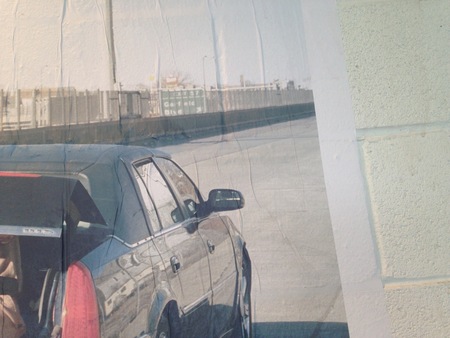 In the spring of 2017, Vidura Jang Bahadur installed a series of photographs he had taken at the Muffler Shop at 359 E. Garfield Blvd near Washington Park on the South Side. The building is owned by the University of Chicago and is a part of its art initiatives. Bahadur’s photographs were street photographs – of people at the lake shore and in the parks on the south side, of storefronts and prairie grasses, some portraits of an individual or a small group, some larger crowd gatherings. 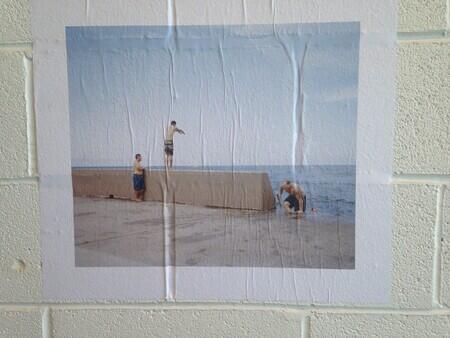 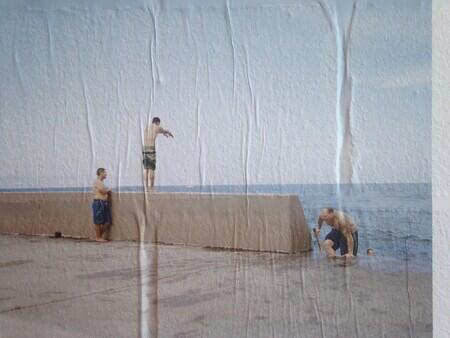 In the photographs there was stillness and composure, and I also felt the photographs raised the issue of arbitrariness, how these people came to be in this place. The images are de-saturated, which gives a sense of incompleteness. The photographs had mostly been taken in 2016 and were untitled. 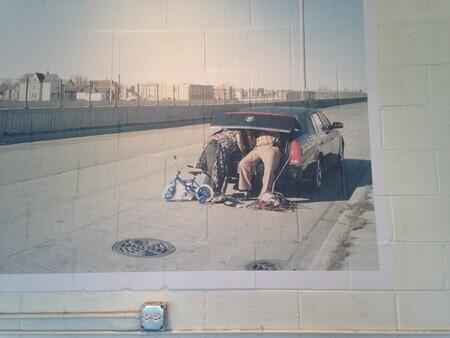 This is a different detail of the same photograph: 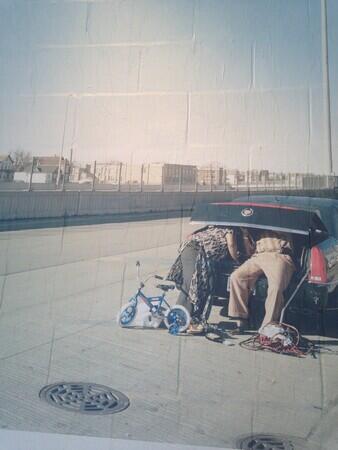 Bahadur is interested in urban planning, and in the catalogue for the show, he wrote of how the city of Chicago has been “carved” into “distinct racial geographies,” by policy, through the built environment. The show was a part of the Department of Visual Arts MFA presentations for the year, and in the space there were also works by another artist, Kyle Hossli; I did not take any photographs of Hossli's work. The ensemble of works for the spring was called “And…and…and,” the group of works by Bahadur did not have a specific title. 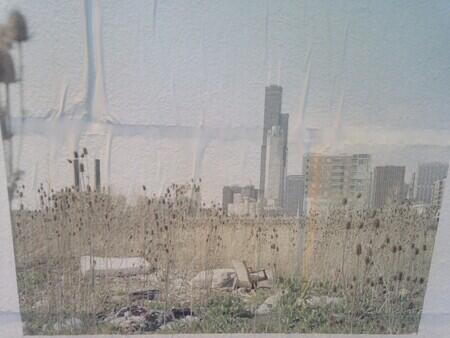 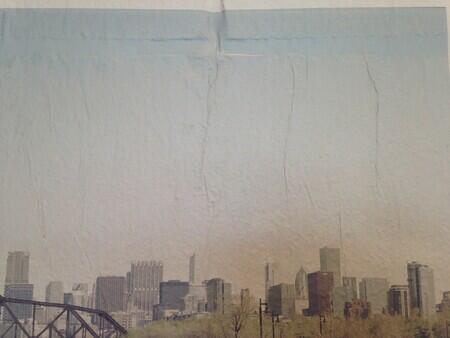 The spring of 2017 was my first spring in Chicago, and the end of Vidura Jang Bahadur’s second year in the city, and in the MFA program. Before Chicago, Bahadur had worked as a photographer for many years in India, China, and Tibet, and had particular interests in photographing people who had migrated or been forced to migrate. At the University of Chicago, he had enrolled in the first course I taught there, on the essay and moving through landscape. In the years since, he and I have collaborated on several projects – working together to edit and design a community anthology and a set of chapbooks, both are of writing and images by other people having to do with migration. He also recently took the photograph I use as my author photo. At the time I saw the show, though, we knew each other less well. It is also the only show of his work that I have seen. 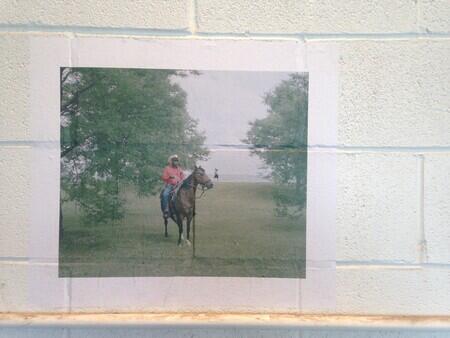 Bahadur has not shown these photographs in commercial galleries, and it was important to him to install the show in a way that recognized that the images were of the neighborhood, taken of the neighborhood and in some way belonging in and to the neighborhood. Some were also installed outside the Muffler Shop building on a nearby wall and storefront. 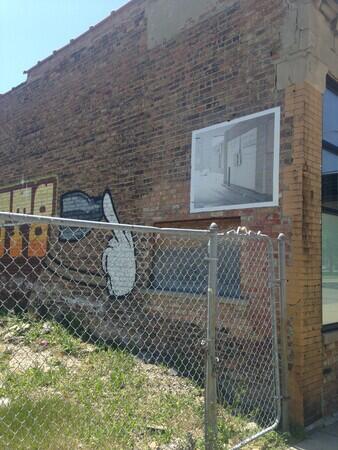 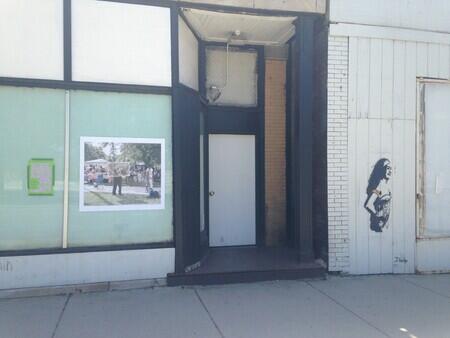 He printed the images on regular bond paper and pasted them to the walls of the Muffler Shop using wall adhesive and to the nearby exterior spaces using wheat paste. When the show was over, he washed the interior walls down, the photographs disintegrated and the images receded into the digital archive; some vestiges of the exterior images remained until last year. I went to the show close to the end of its time, and was very aware of how transitory the images were, that they were soon to be washed away. 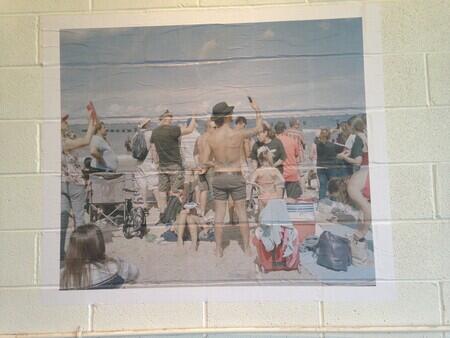 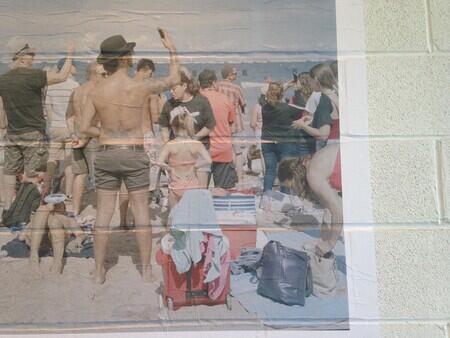 It made me see more acutely how much I assume, and invest in, the permanence of photographs. I take them to be a record that will outlast me, and to be in some way both immaterial and valuable, almost as if the point of the living were to achieve itself in the image. This show made them material — wrinkled and faded and pasted and less the point. This man on the horse did not achieve his meaning in being photographed (though he knows how to pose for a photograph) – he had his meaning, and has it still, somewhere else, when this photograph is washed away. 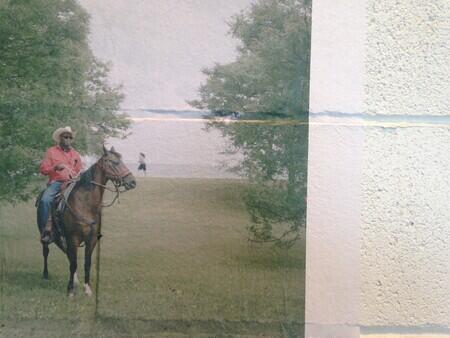 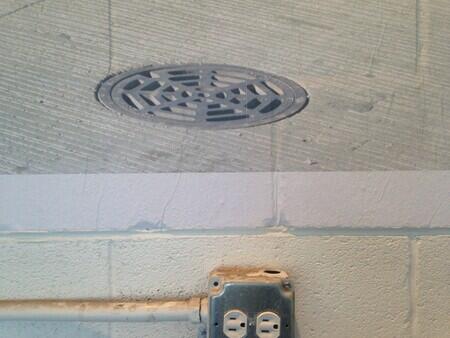 When I saw the show, I began from the inside of the space, and the images I have concentrated on were mostly mounted in the interior. Vidura Jang Bahadur was there on the day I saw the show, and he told me that he later thought he would have liked to install more of the images outside. I also spent quite a bit of time with the outside images and I found them, and their installation, trustworthy and clarifying. When I write on Monday, I would like to try to think about why. 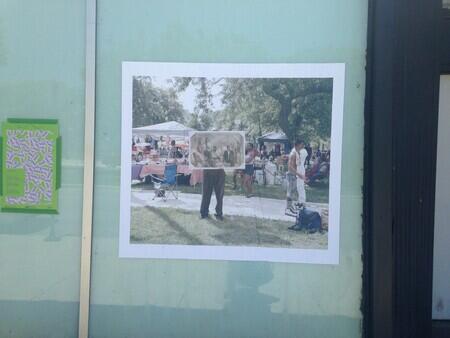 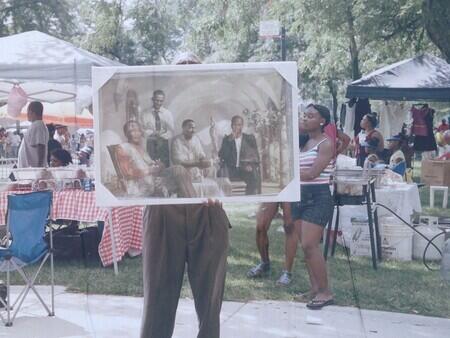